In previous post, I described the concept of VXLAN and said it is heavily used in SDN (Software Defined Network). Although SDN is a relatively new concept, the support for virtual networking is not - Linux bridge has made it possible long before. It could be helpful to learn something about this predecessor before diving into SDN.

Linux Bridge is a kernel module that was first introduced in 2.2 kernel, then rewritten by Lennert Buytenhek. The code for bridging has been integrated into 2.4 and 2.6 kernel series. It implements a subset of the ANSI/IEEE 802.1d standard. In the end of the article, we will use a lab to learn the usage of Linux Bridge.

What Is a Bridge?

In the network course I had in school, only hub (Layer 1 device), switch (Layer 2 device) and router (Layer 3 device) are introduced and compared. All I know about bridge is, a bridge is a switch with only two ports. Maybe because nowadays bridges are not as widely used as switches and a switch is more advanced than a bridge, the switch is usually selected as the representative of Layer 2. It kind of makes sense - if iPhone X is available, why buying iPhone 8?

In some articles, the authors try their best to list differences between a bridge and a switch. For example, this wiki page shows 7 of them. Honestly, I am not quite convinced by those stated differences. My opinion is that people just try hard to make up differences to distinguish these two terms and refuse to admit that they actually have no major differences. This can be supported by the book Understanding Linux Network Internals in which the author says:

The terms bridge and switch can be used to refer to the same device. However, nowadays the term bridge is mainly used in the documentation (such as the IEEE specifications) that discusses how a bridge behaves and how the STP works. In contrast, references to the actual devices are usually made with the term switch.

The only cases where I have seen people referring to a bridge device using the term bridge is when the device is equipped with only two ports (and bridges with two ports are not that common nowadays). This is why I often define a switch informally as a multiport bridge. Unless you are familiar with the official IEEE documentation, you will probably use the term switch. I personally worked on bridging software for years, and as far as I can remember, I used the term bridge only when working on the documentation, never to refer to a device on any network setup.

Generally speaking, I can say that there is really no difference between a bridge and a switch.

One use case of Linux bridge is bridging VM network. For example, suppose you have a physical Linux machine running as a KVM hypervisor that hosts some virtual machines. Now all the virtual machines want to access the external network but you have only one physical NIC (Network Interface Card). How can it happen? One solution is to use the Linux bridge. We will discuss how it works later. Before that, let’s first see how a bridge is used in the physical network.

Suppose in your office there is a small router with 2 ports - one WAN port and one LAN port. If you are the only one in the office then it is sufficient. However, there are two other colleagues also want to access the internet at same time. Thus you need the help of a bridge (or switch if you prefer. I will always use the term bridge hereafter) with at least 4 ports, as shown below:

In the virtual world, nothing is new. All concepts we discuss above still apply. The only difference is, instead of a physical bridge with physical ports that you can see and touch, it now becomes a invisible and untouchable virtual bridge. Suppose in above network, one physical machine is a KVM hypervisor. Let’s enlarge it:

Obviously everything looks similar and now the pNIC on the physical machine now becomes the “router” of the virtual world. In order to distinguish between physical and virtual world, we call a NIC on a VM vNIC and call a virtual port on the Linux bridge a tap interface.

In this lab, I will use a KVM-enabled Linux machine. Honestly it is a virtual machine. But for the purpose of this lab, we just think it as a physical one. If possible, it is always better to use a true physical machine.

First, we have to create a bridge. There are two ways to do it - one is using distribution-specific scripts; the other is manual configuration. See “Public Bridge” section in this instruction. For simplicity, I will use the first method. However, the second one worth trying since it shows how a bridge is created and how the ports are added to it step by step. Since my hypervisor is an ubuntu machine, I need to modify the /etc/network/interfaces file and restart the network:

Note: My pNIC interface name is ens33. Typically for a physical machine, it should be eth0.

After restart the network, the bridge br0 should get the IP address (through DHCP) while the physical ens33 is left without an IP address. As shown below:

Notice that the interface br0 and ens33 have the same MAC address. Because currently ens33 represents not only the pNIC but also the uplink port of the bridge. This implies the green dot line in above graph.

Second, start a VM and set it to connect to the bridge br0. I am using Virtual Machine Manager, which is a GUI application for libvirt. The setting is as follows: 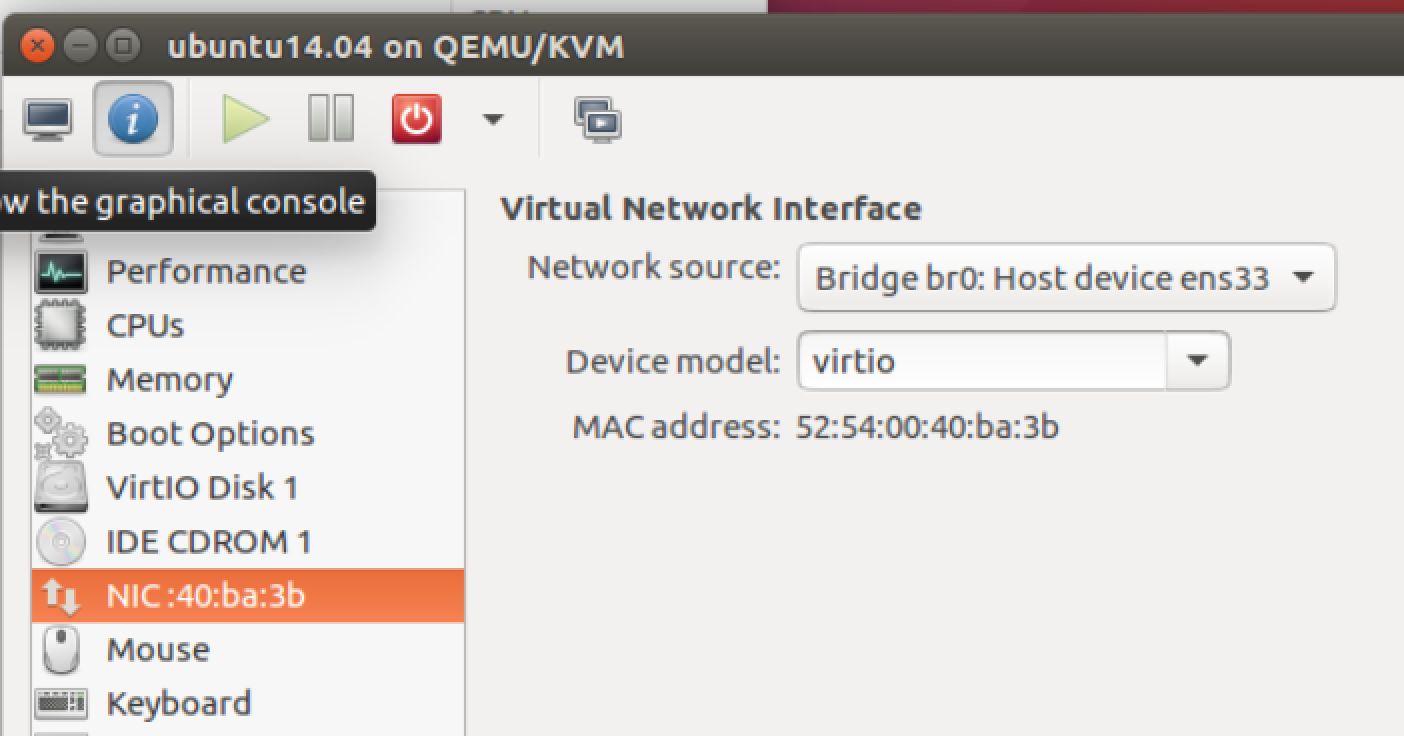 Or if you prefer to start a VM with command line, then just add the parameter -netdev tap. This will connect the vNIC to the tap interface on the bridge. For example, the command libvirt uses to start the VM is as follows:

After starting the VM, the bridge should now have two interfaces:

The interface vnet0 is a tap interface created by libvirt.

Now the VM should be able to connect to the Internet through this bridged network. On the VM, run:

I will add another VM before next step. After that, libvirt should create one more tap interface vnet1. Now our topology looks like: 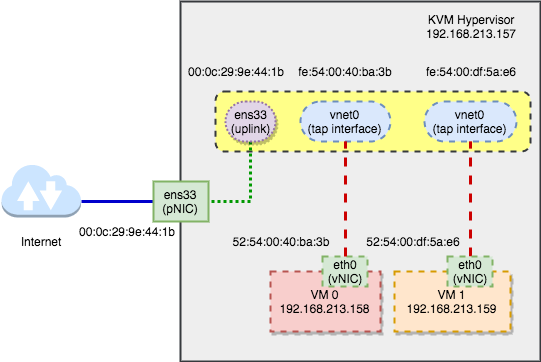 In this step we will use Wireshark to capture packets on each interface. Before that, let’s look at the bridge’s initial MAC table:

Note: I have no idea why the MAC table shows duplicate entries for each local port. Here somebody said it might be a bug. This person asked same question but was not answered. Please do let me know if you have the answer!

Suppose no duplication exists, then this table shows the initial state of the MAC table before any traffic goes through the bridge. The bridge only has local MAC addresses of its ports. From ifconfig results in step 2, we know that port 1 is br0(ens33), port 2 is vnet0 and port 3 is vnet1.

Ping from VM0 to VM1

The result in Wireshark:

We only sent one ICMP request, why there are so many of them? Let’s analyze them packet by packet. We can add one column that shows the interface on which the packet is captured and order the result by time:

Ping from a VM to the Internet

This time we ping from a VM to the Internet and again use Wireshark to capture the packets.

I will leave the analysis to the reader.

In this post, we discussed what is a Linux Bridge and compared it with a physical bridge. We also did an experiment in which Wireshark is used to capture packets in a KVM bridged network. Analysis of the captured packets matches the theory and helps us understand how exactly the bridge works.