In previous pos, we learned some rate limiting algorithms. In this article, we will see how rate limiting is implemented in Google Guava library.

RateLimiter class is the base class for all types of rate limiters. Currently Guava only has two implementations: SmoothWarmingUp and SmoothBursty.

RateLimiter provides two static creators that will create a SmoothBursty rate limiter and a SmoothWarmingUp rate limiter respectively. We will talk about these two rate limiters later.

RateLimiter class takes care of multi-thread access to methods by using a mutex.

In each method, syschronized(mutex()) is called around operations, including invocation to abstract methods implemented by subclasses so that they don’t need to worry about concurrency.

Think: why it uses two if statements to check the mutex value?

Everything else is taken care by the base class RateLimiter so that a subclass only has to implement the following four methods:

The first two methods are straightforward and they imply that a user can change the rate at runtime.

queryEarliestAvailable takes current time and returns the earliest available time of next permit. It is called when checking whether a permit can be granted with certain timeout:

Personally I think this method will be easier to understand if the return statement is changed to: nowMicros + timeoutMicros >= queryEarliestAvailable(nowMicros), which means return true if and only if we can pass the earliest available time of next permit after waiting for at most timeout microseconds from now on.

reserveEarliestAvailable reserves the requested number of permits and returns the earliest time when all permits are available. This method is called to calculate the duration that the caller has to wait before getting all permits.

reserveAndGetWaitLength is the method used to calculate the time to wait by calling reserveEarliestAvailable.

RateLimiter depends on a SleepingStopwatch to mesure the time elapsed since start as well as sleep the thread whenever needed.

This class also provides a static creator method which creates an implementation with the help of another two classes in Guava: Stopwatch and Uninterruptibles.

tryAcquire() and acquire() are the two most important methods, which are responsible to calculate the throttling time and sleep for that long.

tryAcquire() has four overload methods, but all of them finally call to the following one:

The method first calls canAcquire to check whether the requested permits can be acquired within the timeout value specified by the user. If not then it directly returns false. Otherwise it calculates the time it needs to wait and sleeps for that long before returning true.

acquire() has two overload methods and they finally call to the following one:

Different from tryAcquire(), acquire() will block until all requested permits can be granted. It returns the time spent sleeping in seconds.

The design is based on leaky bucket algorithm. But it also borrows some ideas from token bucket.

One problem of native leaky bucket algorithm is, it doesn’t keep the memory of past underutilization - when lots of water drops after the bucket being empty for long, it still leaks at the same constant rate as usual.

Now the question is, when we serve the permits using storedPermits, how to calculate the time to wait? When there is no underutilization, the interval between requests should be 1 / rate. When a user requests n permits, if they are all served by fresh permits, the waiting time should be n / rate. But if the n permits are all or partially served by storedPermits, what should be the throttling time?

Basically, we need a function that maps storedPermits and permitsToTake to throttling time. SmoothRateLimiter defines an abstract method storedPermitsToWaitTime(double storedPermits, double permitsToTake) that needs to be implemented by the subclasses to play this role.

A SmoothRateLimiter has four member variables:

Here we see that it calls subclass’s coolDownIntervalMicros() to determine how many permits we need to add to storedPermits. This is similar to lazily refilled tokens in token bucket algorithm we discussed in previous article.

resync() is called before reserving permits. See reserveEarliestAvailable below.

This method first saves the old nextFreeTicketMicros to be the return value. Then it calculates how many stored permits and how many fresh permits will be used to serve this the required permits. The waiting time incurred by the stored permits is gotten from storedPermitsToWaitTime implemented by the subclass while the waiting time incurred by the fresh permits is just freshPermits * stableInterval. The total waiting time is the sum of these two value and is added to nextFreeTicketMicros, which means next request will have to wait for at most that long before being granted.

By default maxBurstSeconds is 1 and there is no way for the user to change its value. 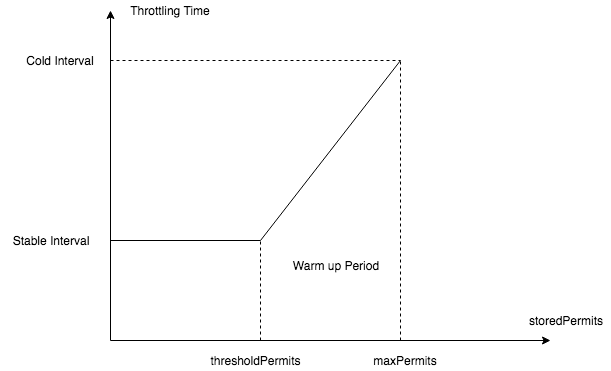 The x-axis is storedPermits and the y-axis is the throttling interval.

Suppose there is a vertical line x = k representing the state of the rate limiter:

warmupPeriod is specified by the user while creating this rate limiter.

coldInterval is the maximum throttling interval, which is calculated by a parameter coldFactor that has a default value 3.0 and is not modifiable by the user.

As we mentioned before, coolDownIntervalMicros is the interval between two increments of storedPermits. In the figure above, it measures how fast our imaginary vertical line goes from left to right. This value is chose to be warmupPeriod / maxPermits so that the time it takes to go from 0 to maxPermits is equal to warmupPeriod.

Suppose currently there are K storedPermits and we request P permits (P <= K). Then the total throttling time should be the area between x = K and x = K - P. 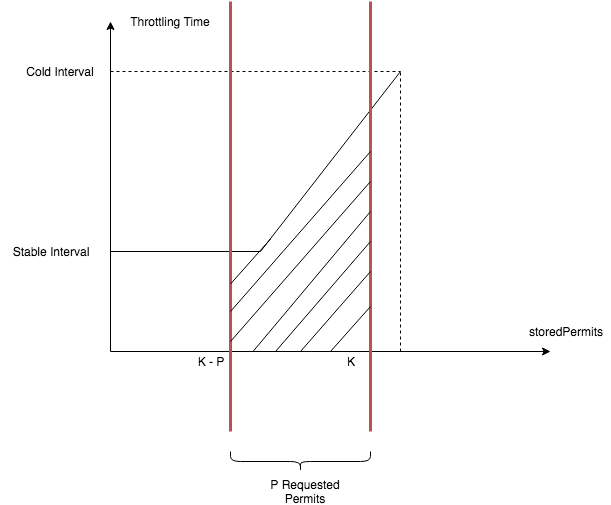 After understanding the implementation, we can find one problem - when we only request 1 permit at a time, the SmoothRateLimiter works as a leaky bucket with consideration of past underutilization. However, if we request many permits at a time, it has the same problem as token bucket. That is, the real-time rate might be higher than the configured rate. And it may starve following requests.

This is because the throttling time is paid by next request instead of current request. And larger requests push next available time further than smaller requests. For example, suppose the rate is 1 per seconds. If we request 100 permits at the beginning, the permits will be granted right away but the next request needs to wait for at most 100 seconds. Since most of the use cases I have seen only require to request 1 permit at a time, I am not sure whether this is a serious problem. But you may need to keep it in mind while requesting many requests at a time.