A few days back, one of my friends asked an interesting question - How is ping deduplexed by Linux kernel network stack? In other words, when a Linux machine receives the ping reply, how does it know which socket to send to?

Compared to TCP and UDP, which are uniquely identified by a port number, ICMP seems to be stateless. After a short discussion, we believe that it is the id field in ICMP header that acts as the identifier. But what if on the same machine, at the same time, two processes ping with the same id, what will Linux do when receiving the replies? To answer this, I read the Linux kernel code as well as ping code in iputils. I also did some interesting experiments.

Internet Control Message Protocol (ICMP) is used by the famous ping tool to detect the reachability of the other host. When we say “Can you ping google?”, we actually mean, “When you send an ICMP echo request to google, can you receive a ICMP echo reply back?”.

ICMP message can have many types, for the purpose of this article, let’s only focus on the echo and echo reply message, which both have the following format:

Note: Though ICMP header is inside IP header, ICMP is considered as a Layer 3 protocol.

The source code of ping in iputils can be found here.

Part of the question asked by my friend is, what if you have two ping process sending two ICMP echo requests with the same identifier at the same time? By reading ping source code, we will know that the short answer is, that’s impossible.

This function set the id field of the ICMP header to ident. This variable is set to the ping process’s id when it starts. This can be found in setup() function in ping_common.c.

Now we know that there is no way to send two ICMP echo request with the same id by using ping. In this case, the unique identifier can be used as the “port” of ICMP. The sequence number is increased by 1 each time an ICMP echo request is sent. When you run ping -c 10 google.com, all 10 ICMP messages have the same id but increasing sequence number.

You may still ask, though two ping processes always have different ids, what if I write my own ping program which can use identical ids? In this case, can the kernel delivers the message to the right socket? To answer that, let’s dive into Linux kernel code.

icmp_recv depends on a list of handlers to handle ICMP packets of different types. And it’s definition is shown below:

ping_rcv calls the function ping_lookup, which finds the socket by ICMP echo identifier. If a proper socket is found, then the echo reply will be sent to it.

Next, let’s explore the magic ping_lookup. (Debug log and code related to IPv6 has been ignored.)

The key is calculated by the following function. Basically it is a hash value of (net, ICMP echo id, a 32-bit mask).

The value is a list of socket and can be gotten by ping_hashslot.

After ping_lookup gets the list of socket by calling ping_hashslot, it iterates through the list and find the right socket by checking 3 conditions:

Code used in the labs can be found here.

At this point, we know the answer of previous question. If two ICMP echo requests with the same id are sent at the same time, then when the reply is received, it will be delivered to the first socket in the list that matches all 3 conditions. That means it can be delivered to a wrong socket when the replies are received out of order because the kernel doesn’t match the sequence number. Consider the following case:

Apparently, in this case, the user program has to match the sequence number.

Let’s do an experiment to see the actual behavior of the ping in iputils. We will write a kernel module which modifies the echo reply before it is sent to peer with the help of netfilter. In the fist part of this experiment, we only modify the sequence number.

The purpose of the module is to change the sequence number of all ICMP echo replies to 123.

Makefile used to compile the module:

To compile and install this module:

To confirm that the module is loaded successfully:

Next we ping this machine from another machine:

From this result, we see that the ping program of the version shown above can detect duplicate ICMP echo replies, but it can’t figure out that the sequence of the reply doesn’t match the request.

Notice that when the sequence number is changed, the old checksum becomes incorrect.

Interestingly, ping provided by MacOS won’t accept this change. Result from my laptop: 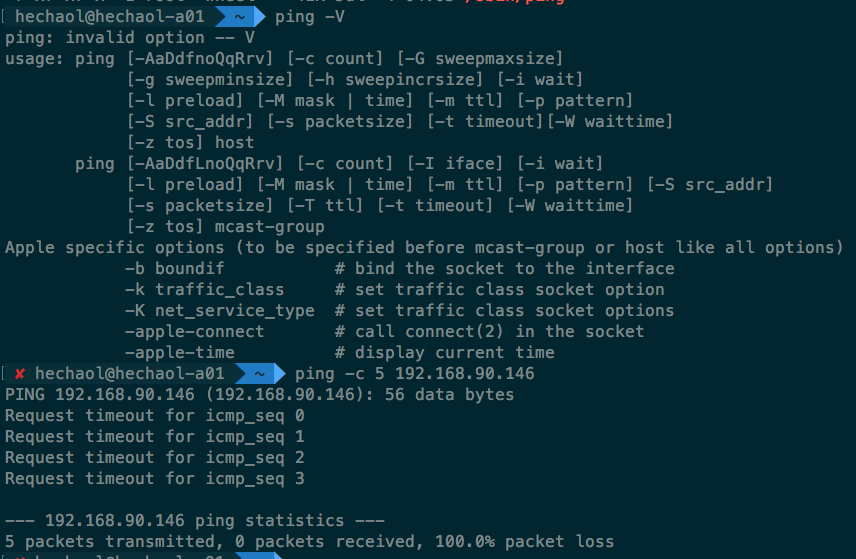 However, in this case we don’t know whether MacOS ping dropped the replies due to incorrect checksum or sequence number. To verify it, we have to fix the checksum after modifying the sequence number.

Add a function to calculate checksum:

Call it after modifying sequence number:

Then compile the module and reinstall it:

This time the result is similar to the ping in iputils, which means though MacOS ping rejects replies with incorrect checksum, it doesn’t check the sequence number either.

Now you may ask, what if they have the same id and same sequence number? In this case, we still have one field that can distinguish them - data (payload).

An ICMP echo request can have payload. And the reply must also contain the same payload. For example, by default ping put current timestamp as the payload so that when it can figure out RTT (Round Trip Time) from the reply.

At this point, it seems that if two ICMP replies are identical, which means they have same id, same sequence number and same data, it doesn’t matter which reply is sent to which request socket because there is no difference!

But does ping really match data field? Let’s do an experiment.

We will reuse code in part 1 but the hook_func is slightly different - in stead of modifying the sequence number, data is modified this time. Checksum is also fixed.

Only the first byte of the data is modified.

Obviously, ping in iputils doesn’t realize that the data is tampered!

Ping from MacOS with 1-byte payload: 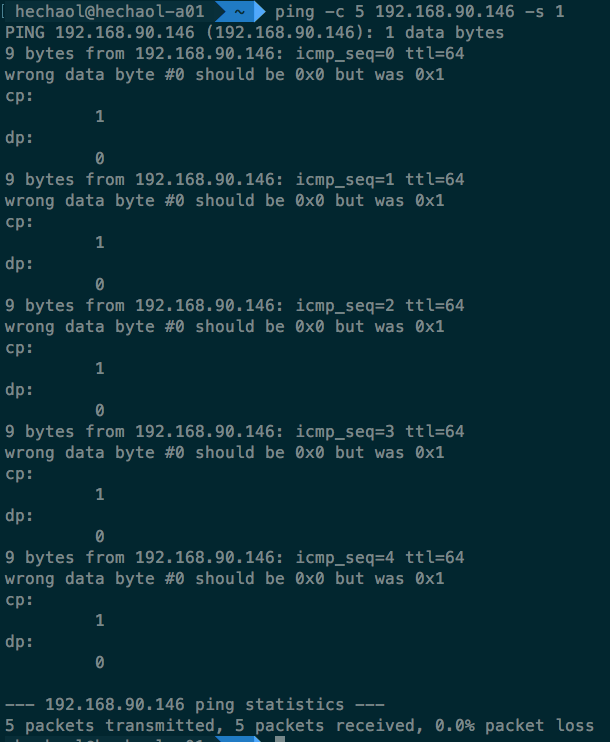 MacOS ping seems to be more intelligent because it can detect the wrong data in reply.

In this article, we have answered the following questions:

Answer: No. When using ping provided by iputils, the id field in ICMP echo request is always the process id.

Answer: Linux kernel identifies an ICMP echo message only by id and interface where it is sent/received. If two echo requests on the wire have the same id and is sent through the same interface, then the reply received first will be sent to the first sender, despite that it might be the reply to the second sender. It is the responsibility of user program to match other fields in the reply such as sequence number and payload.

Answer: No. But MacOS ping can.

Answer: No. If ping sends an ICMP echo request with id = 1, seq = 1 but receives an echo reply with id = 1, seq = 2, it still counts it as the reply of the request. MacOS ping has the same behavior as long as the checksum is correct.

Answer: No. But MacOS ping can.