Among all BPF map types, two special ones, BPF_MAP_TYPE_ARRAY_OF_MAPS and BPF_MAP_TYPE_HASH_OF_MAPS, are more complex than others. As the names imply, they are “map-in-map”, meaning that the value of each entry is also a map. 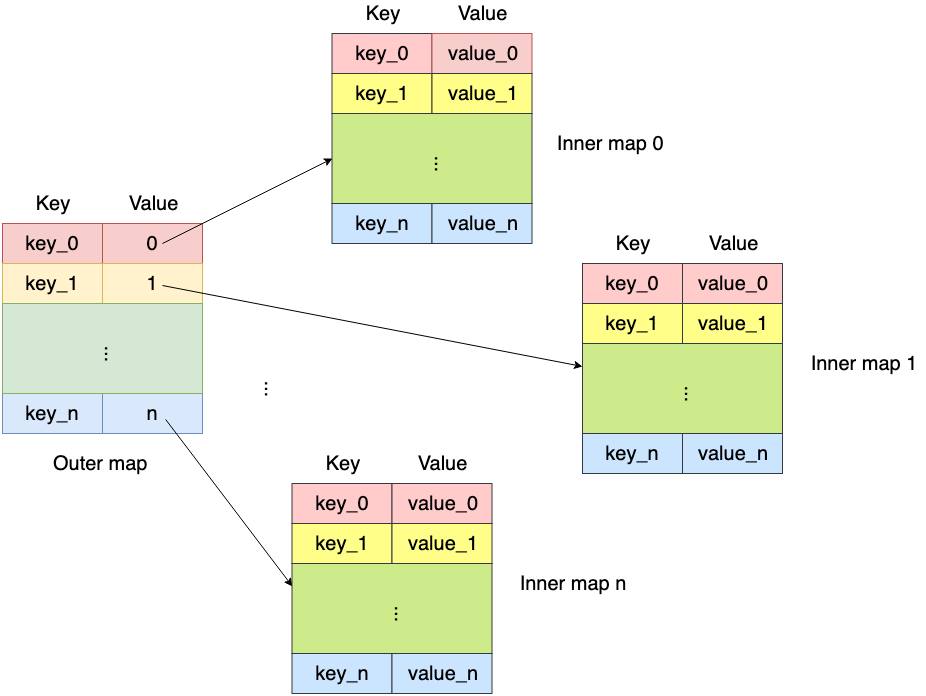 Due to this indirectness, CRUD (Creat, Read, Update, Delete) operations on a map-in-map are different from those of a regular single-level map. In this post, I will use a simple example to illustrate the basic usage of a map-in-map and some caveats.

During load time, all regular maps defined in a BPF C program are created. However, a map-in-map is different in that you only have to define the outer map in the source code. It makes sense since inner maps are created and inserted into the outer map at runtime by the user. The map meta data is defined in struct bpf_map_def, same as all other regular map types. For example,

Though you don’t have to define the inner map in BPF C program, the verifier needs to know the inner map definition during load time. Therefore, before calling bpf_object__load, you must create a dummy inner map and set its file descriptor (fd) to the outer map by calling bpf_map__set_inner_map_fd. The dummy map fd must be closed after load since its only used to make the verifier happy.

There are 3 steps to insert an entry into the outer map:

Delete operation is as simple as other regular maps.

All inner map resources should be released after bpf_map_delete_elem as long as you have avoided all the memory leak risks mentioned above. I would highly recommend you do some stressful tests including bulk insertion/deletion to make sure there is no memory leak, which w had in our project once.

Complete code can be found on github.