As we know, input and output (I/O) operations on a computer can be extremely slow comparing to running CPU instructions. A simple approach of performing an I/O operation is to block the current execution until the I/O is complete (i.e. synchronous I/O). However, this can be a waste of system resources because the CPU does nothing useful while waiting for I/O completion. A better approach would be asynchronous I/O, which means after issuing an I/O request, instead of waiting for it to complete, the CPU can spend time processing instructions not depending on the I/O result.

There are many options to implement asynchronous I/O on Linux. For example, we could use I/O multiplexing mechanisms such as select, poll, epoll described in my previous post. Or we can use asynchronous interfaces provided by the kernel such as aio or io_uring. However, each option has its own distinct way of supporting asynchronous I/O, which is usually not that intuitive and straightforward. A developer needs to read their documentation thoroughly to figure out the correct usage. Hence, my friend Andrew and I started a project, Rocket I/O, with the goal of making programming with asynchronous I/O simpler and more intuitive.

Input and output (I/O) operations usually involves reading from or writing to an device such as a disk (e.g. file I/O) or a remote computer (e.g. socket I/O). An I/O operation is generally much slower than CPU running instructions. Therefore, I/O is usually the bottleneck in an application. It’s like programming. No matter how fast a programmer’s brain runs, their coding speed is only as fast as their typing speed (i.e. I/O speed).

There are two ways to handle I/O operations: synchronous and asynchronous.

Secondly, multi-threading without asynchronous I/O can only achieve “global asynchrony”. By that I mean, for a multi-threaded program on Linux, when one thread is blocked by I/O, it may be preempted in favor of other runnable threads. Later when the I/O is complete, the original thread can be resumed. This is what I call “global asynchrony”. However, from each thread’s point of view, there is no asynchrony because it’s blocked when an I/O is ongoing. 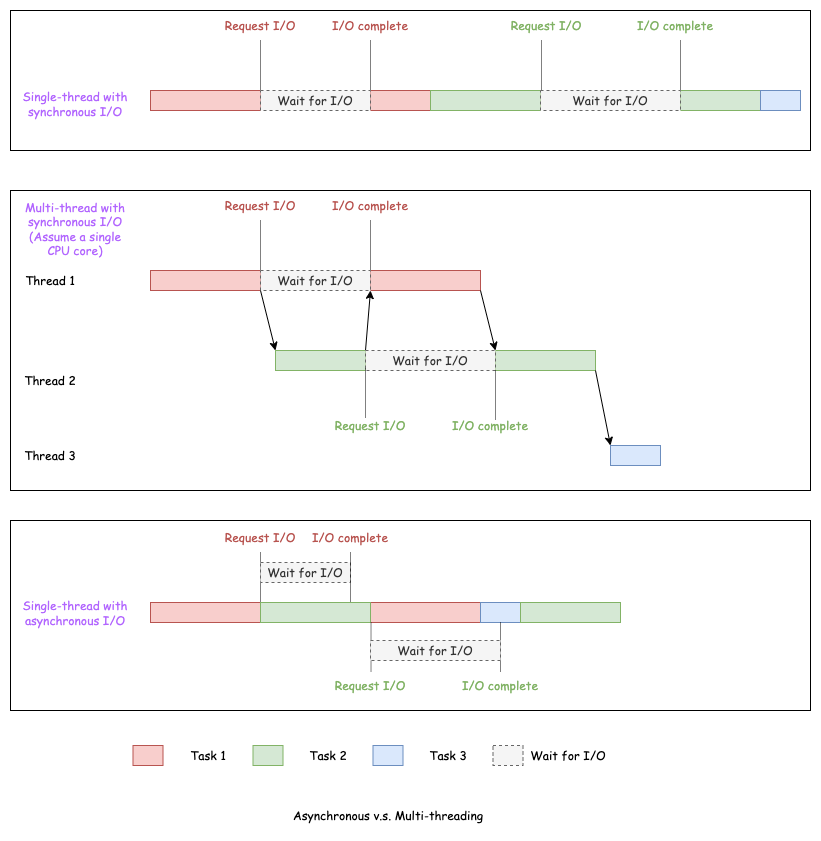 The difference between these two concepts is more subtle. My understanding of the subtle difference is,

In fact, I found that usually people can use these two terms interchangeably without causing confusion.

Fiber is a vital component in implementing asynchronous I/O. Wikipedia says “a fiber is a particularly lightweight thread of execution”. And I believe the best way to understand what a fiber is to compare it with thread.

This cooperative context switching is the key for an async runtime like Rocket I/O. Basically, when a fiber is requesting an I/O, it knows that the I/O will take a while so it will voluntarily yield to another fiber.

I always believe that the best way of explaining a computer science concept is to show it in code. So I’m going to write a simple task using fiber and thread respectively to show the differences.

To run the program:

When using fibers, we no longer need mutex and conditional variable because one fiber can simply yield to the other when the number is not what it should print. The following implementation works on x86_64.

In this simple implementation, a fiber context is nothing but a stack, a program counter and a few registers. When one fiber yields to another, it simple switches these registers to the values of the other fiber.

First, we need some assembly functions to initialize and switching fiber contexts. Knowledge on x86_64 assembly and calling convention is needed to understand the code. Here is a good cheatsheet. In fact, both functions should also save and restore the callee-saved registers but I omitted it for simplicity.

Then, we need a very simple fiber implementation, with the only fiber context being its stack pointer.

As we can see, each fiber just yield (i.e. switch_run_context) to the other after printing and increasing the number. No synchronization mechanism is needed. Also note that I just call exit after each fiber finishes printing because this simplified implementation can’t return to main function.

To build and run the code:

io_uring is a relatively new asynchronous I/O interface on Linux. It is currently the only asynchronous I/O back-end supported by Rocket I/O. There are already many good resources on the Internet talking about io_uring. I don’t think I can explain it better than others. I will just list a few that I found useful:

You can check out the code of Rocket I/O on Github.

Rocket engine is the asynchronous I/O back-end. The goal is to implement various engines such as epoll, aio, etc. But for now the only supported engine is io_uring.

A rocket engine mainly provides two interfaces: one to submit an I/O request and the other to get a complete I/O operation. When a fiber makes an asynchronous I/O call, it calls the submit interface and set the fiber state to blocked. Later, the executor will call the complete interface to get the completed result and wake up the fiber by setting its state to runnable.

A rocket fiber is nothing but a fiber with the following contexts: 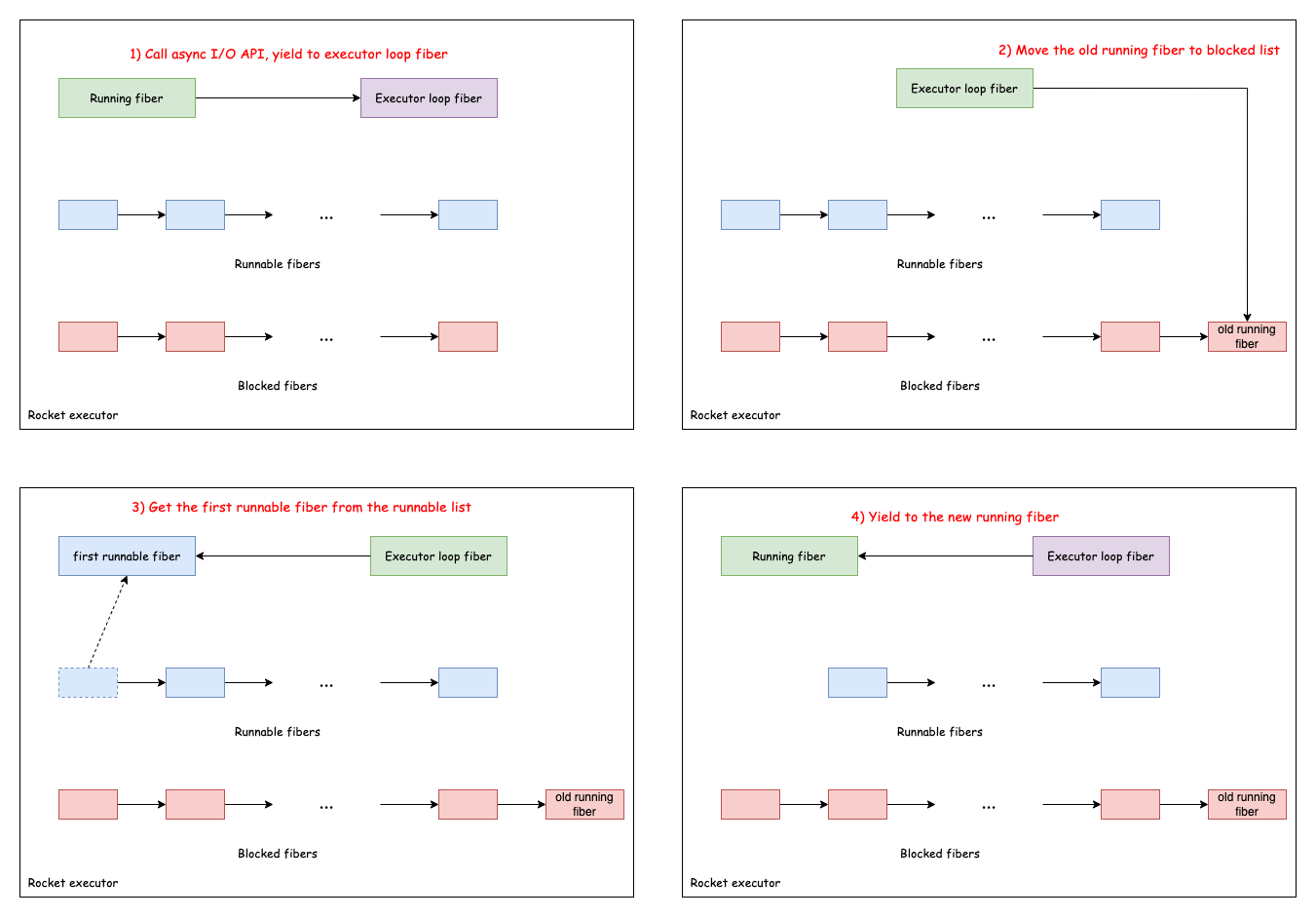 In theory, I think the answer is yes because fiber is lighter than thread as we can see from the simple fiber implementation above. But I wasn’t 100% sure until I ran a benchmark to compare the performance between them with a simple echo server workload.

I used rust_echo_bench as the benchmark tool and borrowed the script from here. The result shows that fiber with asynchronous I/O has higher performance than pthread with synchronous I/O when both running on one CPU core. 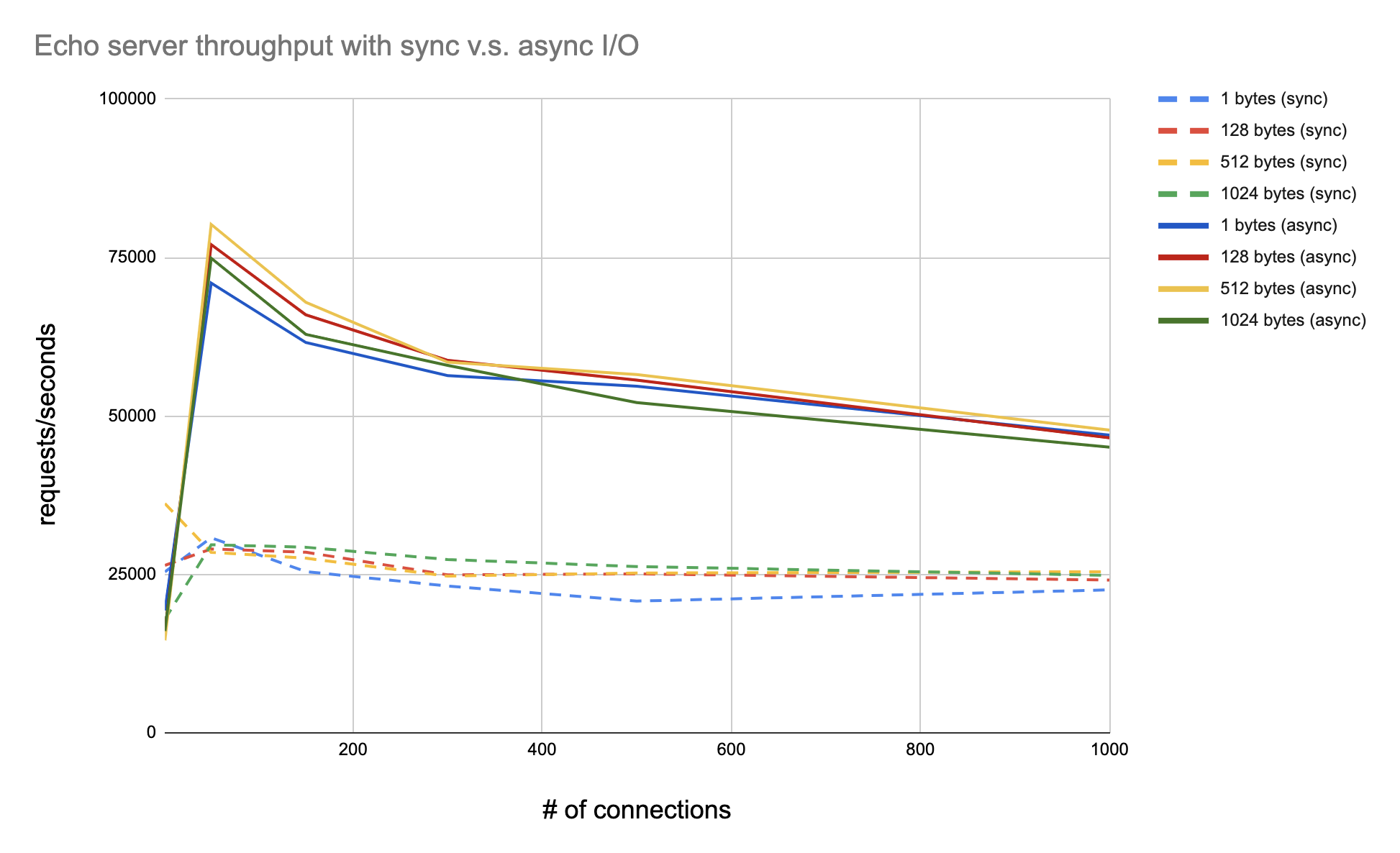 There are still more future work to do such as implementing more asynchronous I/O engines, cross-platform support, multithreading to fully utilize all CPU cores, etc. Feel free to contribute if you’re interested!