[This is the seventh article in this series. The previous one can be found here.

Let’s first learn some basics about cgroup. Note that I will only talk about cgroup v2, which will eventually replace cgroup v1. If interested in cgroup v1, see Documentation/cgroup-v1/.

“cgroup” stands for “control cgroup” and is never capitalized. It organizes processes hierarchically (like a tree) and distributes system resources along the hierarchy[2]. Each process belongs to one and only one cgroup. In cgorup v2, except for the root cgroup, processes can only belong to a “leaf cgroup”, a cgroup that doesn’t have any child cgroups.

For example, in the following diagram, 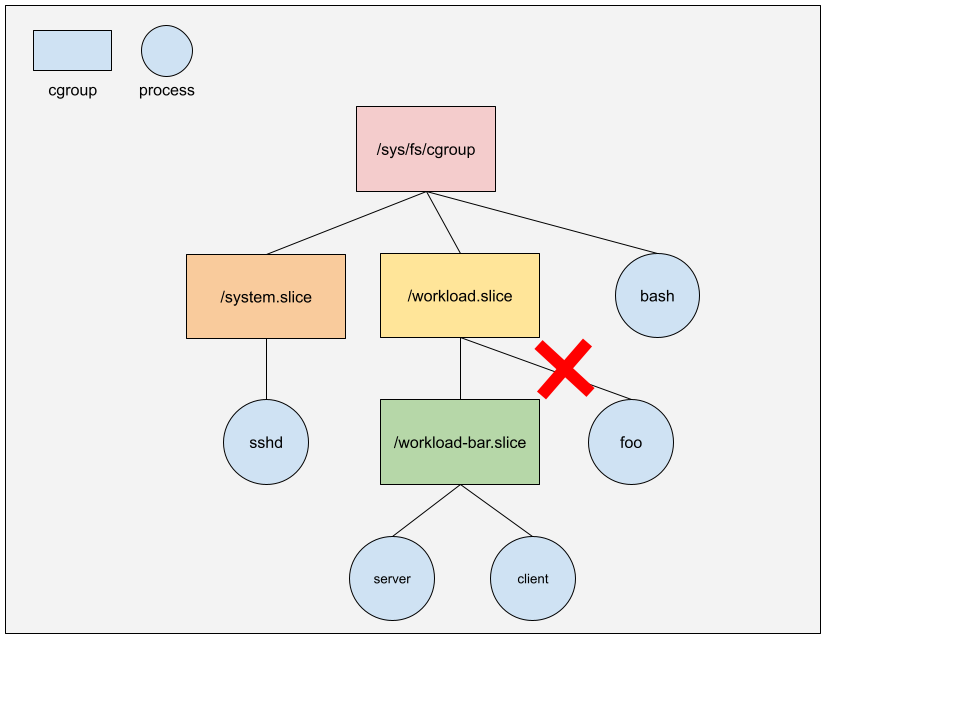 You may use systemd-cgls command to check out the cgroup hierarchy on a Linux host.

A few things to note about cgroup (v2):

For example, in the following diagram, 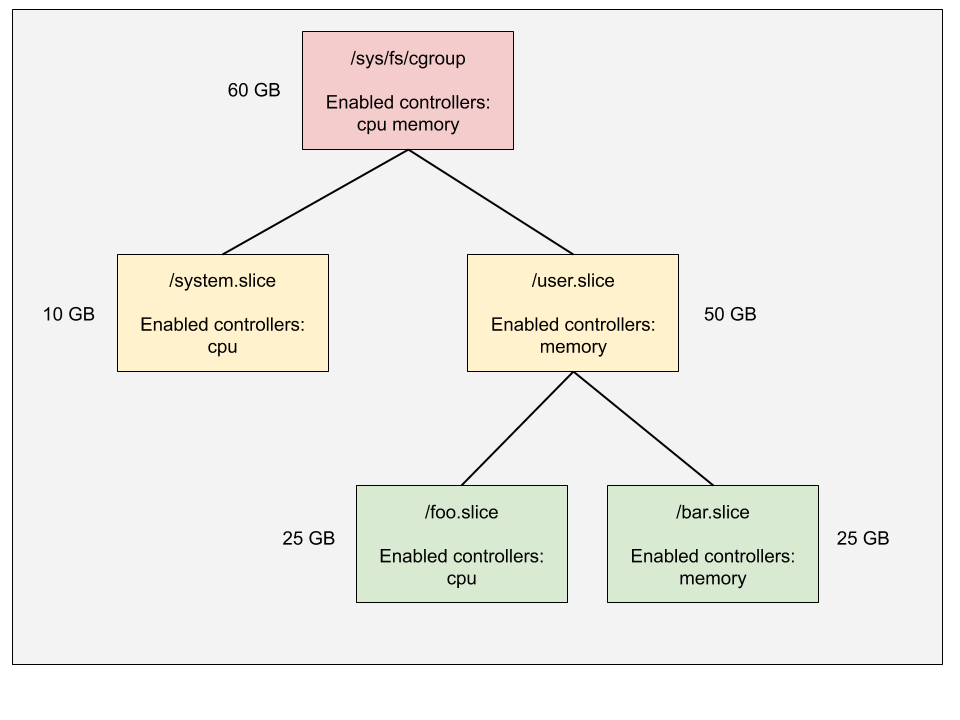 Next, let’s do some experiments to get familiar with cgroup.

Creating a cgroup is as easy as creating a directory.

Upon creation, interface files with default values are also created.

Do you notice something strange?

One question I had when I saw the output was, if no controller is enabled, then why were the controllers’ interface files (e.g. cpu.max) created?

The short answer is, because these controllers are enabled in its parent cgroup (root cgroup in this case).

That is, enabling a cgroup controller will create the corresponding interface files in its child cgroups instead of its own cgroup. The reason is simple, when you enable a controller, what you mean is to regulate the resource distribution to its children instead of to itself. That’s why the controller enablement interface file is called subtree_control as it controls the “subtree”. That means that the controller interface files – anything which doesn’t start with “cgroup.” – are owned by the parent rather than the cgroup itself [2].

This also implies that a cgroup’s cgroup.subtree_control file is same as its direct children’s cgroup.controllers files because only the controllers enabled by the parent are available to the children.

Add a process to the cgroup

Adding a process to a cgroup is as easy as appending its PID to cgroup.procs file under the cgroup directory.

We can configure the memory hard limit by writing memory.max file. In this experiment, we will also set memory.sawp.max to zero to disallow swapping out anonymous memory of the cgroup.

With this two configs combined, any process that uses more than 100MB memory will be killed. Let’s test it by running a memory eater.

This memory eater was killed by a OOM (Out-Of-Memory) killer before eating more than 100MB memory. This OOM event can be found in memory.events file.

At this point, the attempt to enable memory controller in this cgroup will fail. Why? And how to make it work?

(You should know the answer if you remember two important points we mentioned earlier.)

Next, we will add a feature to our mini container to allow the user to set the memory limit. Before jumping into implementation, let’s also examine some memory configs provided by the memory controller.

If the total memory usage of a cgroup subtree is below this value, then this cgroup’s memory won’t be reclaimed unless the kernel really can’t find any other reclaimable memory. (Memory reclaiming is a topic on its own so I won’t cover it here.) This is a best-effort memory protection mechanism.

Similar to memory.low. However, rather than “best-effort”, this config provides hard memory protection. That is, If the total memory usage of a cgroup subtree is below this value, then this cgroup’s memory won’t be reclaimed under any circumstance. For more information, see mm: introduce memory.min.

This is the main mechanism to control memory usage. If the total memory usage of a cgroup hits this limit, then all its processes will be throttled, meaning that they will be forced to memory reclaiming. Note that going over this limit won’t invoke the OOM killer. In other words, the processes won’t be killed but will experience performance degradation. It is possible that the sum of this value among all child cgroups is larger than the value of the parent cgroup.

This is the final protection mechanism. It is the hard memory limit, meaning that if this limit is hit, then the OOM killer will be invoked.

To make the implementation simple, we will only allow the user to specify the hard memory limit memory.max. Technically speaking, this config allows user to set max “RAM” rather than “memory” because the container can still use swap space once memory.max is hit without being killed.

The code change is simple, we only need to implement what we did in the experiment in C++. See the following code snippet (error handle is omitted for simplicity).

Since the code assumes mini_container cgroup already exists. We need to create it first.

Run the memory eater program inside the container

Note that in systemd-cgtop output, “Memory” will never exceed 100MB even though the memory eater has already eaten more than that. As I mentioned earlier, since only RAM usage is limited, the container can use more memory by leveraging swap space once the memory usage is over 100MB.

If we monitor memory.swap.current file, we’ll see its value is increased by 10MB per second: