In previous post, I described the configuration of a linux bridge and showed an experiment in which wireshark was used to analyze the traffic. In this article, I will discuss what happens when a bridge is created and how a Linux bridge works.

The source code related to bridge can be found here

In Linux, a bridge is a virtual device. As such, it cannot receive or transmit anything unless you bind one or more real devices to it.

After reading last article, somebody asked me, since a bridge is a L2 device, why we see an IP address with it when we run ifconfig br0? The answer is, the Linux implementation combines a bridge and a router together. We know that a bridge has an uplink that can be connected to a router. Linux bridge makes this connection internal to the kernel. And this router is actually the real device it is bound to. We will discuss that part later. For understanding the bridge, we can just treat this IP address as the bridge’s default gateway. And it is not needed if we want a private bridge.

The definition of the net_bridge struct can be found here.

Only some important fields are listed below:

port_list is the list of ports a bridge has. Each bridge can have at most BR_MAX_PORTS(1024) ports. dev is a pointer to the net_device struct that represents the bridge device. hash is the forwarding table with BR_HASH_SIZE(256) entries.

A bridge can be created with command brctl addbr br0. It eventually calls ioctl with request SIOCBRADDBR:

If we search SIOCBRADDBR in the source code, we will see it is handled by function br_ioctl_deviceless_stub, along with 3 other requests - SIOCGIFBR, SIOCSIFBR and SIOCBRDELBR.

The function is registered in the initialization function br_init.

br_ioctl_deviceless_stub calls br_add_bridge, which allocates a net_device that represents the bridge and then adds this device to the kernel interfaces using register_netdev.

br_dev_setup sets up the private data area of the net_device. It casts this piece of memeory into net_bridge and initializes each field.

To summarize, the call stack of creating a bridge is:

After this step, we have a Linux bridge device. However, we do not have any interface bound to it, which means the bridge cannot transmit or receive anything yet.

After the creation of a bridge, we can add interfaces (ports) to it. Though Understanding Linux network internals states that the bridge must be bound to a “real device”, I think this sentence is only partially true. It is true that a bridge device must be bound to a network interface. However, it does not necessarily need to be a “real device”, which means it does not need to be the interface of the real physical NIC. Even a tap interface can be bound to the bridge for it to function.

The command used to bind an interface is brctl addif br0 tap0. This is also called “enslave”, which means we are making tap0 a slave of br0.

Basically, br_add_if does the following things:

Note, in older version, the device is explicitly put into promiscuous mode in br_add_if. In 4.0 kernel, this is handled by nbp_update_port_count function.

The following figure from “Anatomy of a Linux bridge” shows the relationshiop of functioins we metioned above.

Forwarding database stores the MAC adress and port mapping. The implementation uses a hash table (an array actually) of size BR_HASH_SIZE(256) as the forwarding database. Each entry in the array stores the head of a singlely-linked list (a bucket) which stores the entries whose MAC address hash value falls into this bucket. See struct hlist_head hash[BR_HASH_SIZE] in the net_bridge sturct above. The hash value of the MAC address is calculted by br_mac_hash. I will skip the hash algorithm. 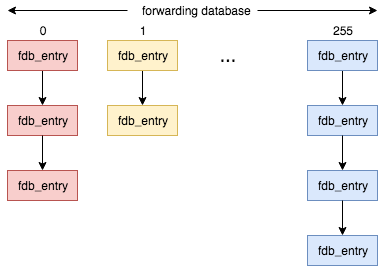 net_bridge_fdb_entry is the element type of the aforementioned linked list.

Since the implementation is a hash table, lookup is same as any hash table lookup. The bridge looks up in the forwarding database when it wants to know which port to forward a frame with a particular MAC address. Thus the key of the hash table is the MAC address. First it gets the hash value of the MAC address by br_mac_hash and then gets the linked-list from that table entry. Next it iterates through the list and compare the MAC address with each element until it finds the right one.

The operations of adding, updating and deleting an entry are all typical hash table operations. I won’t bother repeating how they work and only focus on when they happen.

Ingress data is first processed by netif_receive_skb, which is a generic device-independent function. It calls rx_handler of the device on which the data is received. Remember br_add_if registers a receive handler br_handle_frame for the enslaved device? Here this handler will be called to process data received on the device.

br_handle_frame does some sanity checking first, to ensure this frame is a valid Ethernet frame. Then it checks whether the destination is a reserved address, which means this is a control frame. Special processing is needed if the answer is yes. Otherwise it calls br_handle_frame_finish to handle this frame.

br_handle_frame_finish does the following steps:

Note: if the interface is in promiscuous mode, then this frame will be delivered locally despite of the destination address. And promiscuous mode doesn’t necessarily need to be on because anyway this bridge handler will forward it.

The following figure from “Anatomy of a Linux bridge” may also help understand the frame processing. 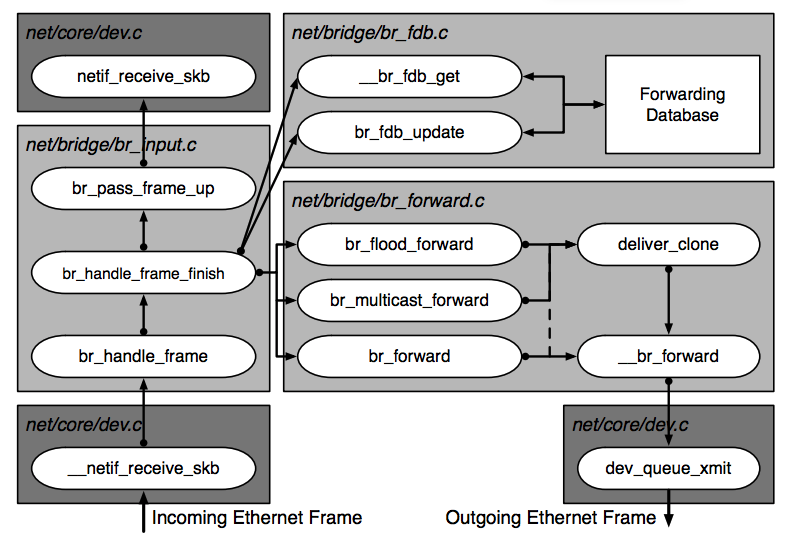 In this article, we discussed how Linux bridge is implemented and what happens when we configure the bridge as well as how a frame is processed by the bridge. Here is a lab that you can try. First add a bridge. Then start two VMs connected to this bridge. Check out the bridge’s mac table by command brctl showmacs br0. And see if you can ping between two VMs. You can also use tcpdump or Wireshark to capture the traffic. Recall what happens when you do each step.