In previous post, we introduced the concept of VXLAN and analyzed the traffic flow in a VXLAN network. It may help understand VXLAN by looking at the real VXLAN traffic. So now it’s time to make our hands dirty!

In this lab, we will set up a topology same as the one we used to analyze the unicast VM-to-VM traffic. 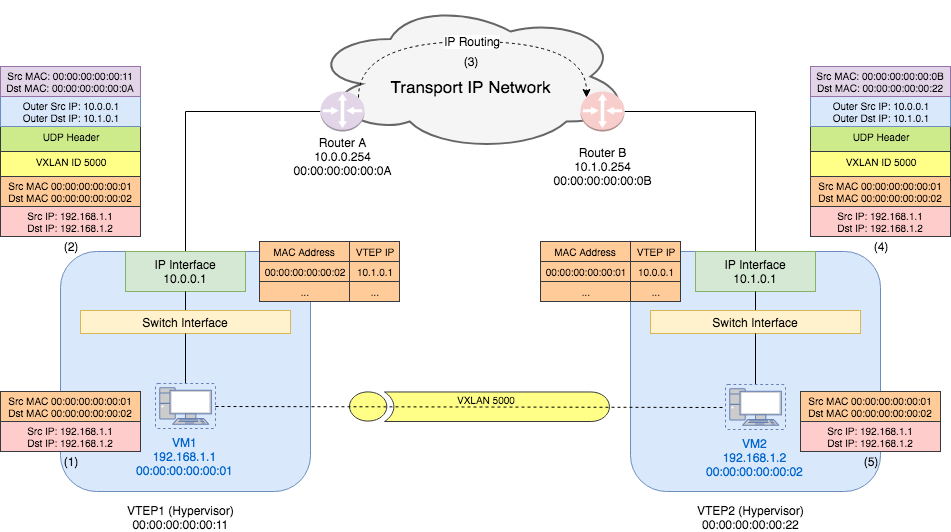 Since we don’t have two hypervisors as VTEPs. we will only simulate the switch inside the hypervisor using OVS VTEP Emulator, which uses Open vSwitch (OVS) for forwarding.

All scripts used in this lab can be found at Github.

The guide on how to use the VTEP emulator can be found here. Since this is not the focus of this lab, I will use a docker iamge of the OVS VTEP emulator I have set up. The image is available on Dockerhub.

This image has ovs installed but no process is running. After start the container, we can start ovsdb-server and ovs-vswitched by the script start_ovs.sh.

We are going to set up a topology similar to the one shown above. Thus we need two VTEP emulators to simulate the hypervisors. docker-compose can be used to set up the topology. The docker-compose.yml file is shown as follows:

Note: To simplify the lab, I have put the two emulators in the same IP network 10.0.0.0/8. That is, there is no router between hv1 and hv2. This is the only difference to above topology.

Each emulator has one switch on it with one port that is used to simulate the VM. I will only show how to set up the first emulator step by step. The second one can be set up in similar way. And the scripts to set up the two emulator can be found here.

First, we create a new switch (the yellow box named “switch interface” in the topology) with ovs-vsctl:

Second, we create a port that is used to simulate the VM. We call this port vm1:

Note: Since this is a virtual port, we need to set its type to internal. For more information, see ovs-vsctl.

Confirm the switch and port are added:

vtep-ctl is used to set up the VTEP database. First, we add the switch br0 to VTEP table and set its tunnel endpoint IP to be the underlay IP. Then we start the VTEP emulator by running script ovs-vtep.

Confirm that the physical switch is added:

The logical network topology is just two VMs connecting to one switch. In other words, the two VMs think they are in the same L2 network. 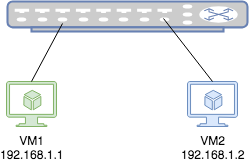 In order to set up the logical network, we need to first add a logical switch and set its tunnel key (VXLAN ID) to 5000.

Next, we need to bind the logical switch to the port/vlan combination on the “physical” switch. (I use double quote here because our physical switch is actually also virtual). This binding is to tell the physical switch to use this VLAN for this logical switch’s traffic in the underlay network. We may talk about how does a VTEP emulator work in later articles.

And we can do similar configuration on “hypervisor” 2.

Can we ping from VM1 to VM2 now? Unfortunately, the answer is no. We still have one trick to do. On “hypervisor” 1, we need to add a mcast macs remote.

Why this is necessary? Remember even in physical world, the first packets between two peers is usually the broadcast ARP request. In VTEP database, mcast_macs_remote table specifies how to handle BUM (Broadcast, Unknown unicast and Multicast) traffic. The command we just use is to tell the switch: for packets whose destination address is unknown (not appear in ucast macs remote table), send them to 10.1.0.1 (Hypervisor 2’s tunnel endpoint IP). This is a hacky trick. Ideally, the BUM packets should be sent to a service node that helps forwards the traffic. For more information, see vtep-ctl.

Now we should be able to ping from VM1 to VM2.

After the first ping, since the switch has already learned the MAC address, even if we delete the mcast mcast remote entry, we should still be able to ping.

We use tcpdump to capture the packets on emulator 1 and 2. Then we ping from VM1 to VM2 and get the dump. I will listen on interface vm1 and eth0 separately in order to get corresponding traffic in the overlay and underlay network:

To make the whole process simple, we can use the script run_lab.sh to set up the toplogy, ping from VM1 to VM2 and collect the dump.

The packets of the underlay network is more interesting.

I will leave VM2 traffic analysis to the readers.

In this post, we set up a VXLAN network topology with the help of OVS VTEP emulator and docker containers. Then we captured the packets of both the overlay and underlay networks. Through the traffic analysis, we consolidated our knowledge on how VXLAN packets are encapsulated and decapsulated so that the overlay network has the illusion of a single L2 network.