We talked about what is a bridge (switch) and how it works here and here. However, we only saw the topology in which one bridge is used to merge LANs. In real life, redundancy is always necessary in order to provide high availability. For example, instead of using only one link between two bridges, we can use two links so that the traffic won’t be affected even if one of them goes down. But this configuration also creates a loop in the topology which can severely affects the network. The Spanning Tree Protocol (STP) is used to make any topology loop-free. In this article, we will see how loops in a topology can be harmful and how STP solves the problem.

Problems of Loops in a Topology

Suppose we have the following topology where two links exist between two bridges.

Obviously, there is a loop between two bridges. When Host A sends out a broadcast packet, what will happen is:

This is the so-called broadcast storm - the broadcast packets will keep flooding the network till the loop breaks or the bridge crashes.

We can see the storm by doing an experiment with Linux bridge. To set up above topology, run the following command:

Above commands will create two bridges and two links (veth devices) between them. Note, we only enable one link portA_0 - portB_0 between two bridges for now.

Launch two VMs using KVM. Let’s call them Host A and Host B. They are connected two bridge A and B respectively. Run the following command to confirm:

On Host A, run the following commands:

On Host B, run the following commands:

After this step, Host A and Host B should be able to ping each other.

Run tcpdump on Host B:

On Host A, ping a broadcast address:

On Host B, we will see one ICMP packet captured.

Then we enable the second link between bridge A and B:

Repeat Step 3. This time we should be able to see a broadcast storm on Host B: 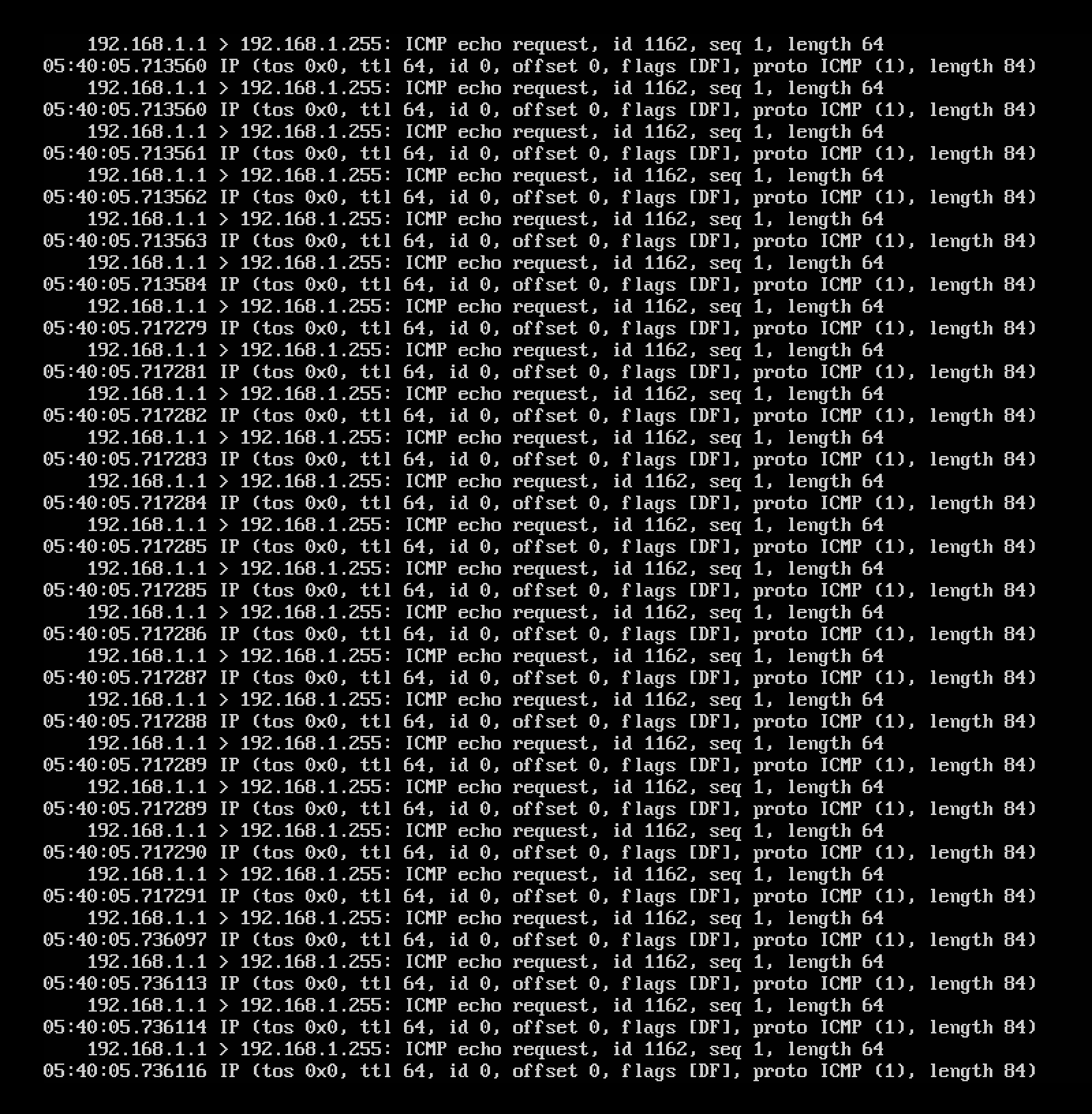 The storm will keep flooding your screen until you break one link by:

In above experiment, when we saw a broadcast storm, we stopped it by manually breaking one link in the loop. Rather than doing this, if we just enable STP on the bridges, the loop can also be logically broken.

Add back the second link:

If now we repeat Step 4 above, we won’t see previous storm any more even with two links between bridges.

The way that STP makes the topology logically loop-free is by putting certain ports into blocking state. When there are configuration changes or bridge/link failures, STP can also detect the changes and update the topology accordingly. We will see how it works in the following sections. Only the basic idea and high level overview will be covered. For more detailed information, see RFC 7727.

There are two bridge roles: root bridge and designated bridge.

Each port can be in any of the following states:

BPDUs are protocol frames used to exchange information among bridges. There are two types of BPDUs:

Initially, all bridges think itself is a root bridge. Thus, each of them start transmitting a BPDU with Root Bridge ID to be its own ID and Root Path Cost to be 0. Eventually, the bridge with the smallest Bridge-ID will become the root bridge. Bridge-ID format is as follows:

That means, if all bridges have the same priority, then the one with the smallest MAC address will win. However, if the administrator wants to configure a specific bridge as the root bridge, he just needs to make its bridge priority smaller than others.

After selecting a global root bridge, other bridges must select their own root port, which is the port with the shortest path to the root bridge. Note, the root bridge doesn’t have a root port while non-root bridges have one and only one root port.

Thus, for all ports on a LAN, the one with the shortest path to root bridge is selected as the designated port. If two port has the same cost, again, the one with a smaller priority vector will win.

Block All Other Ports

All ports other than root port and designated port will be put into blocking state.

We use the following topology as an example: 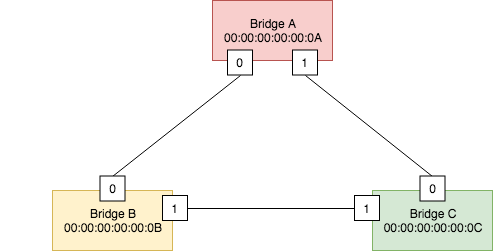 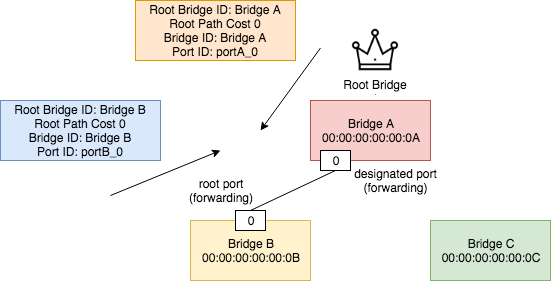 After we enable both ports, we will see BPDUs exchanged by bridge A and B. 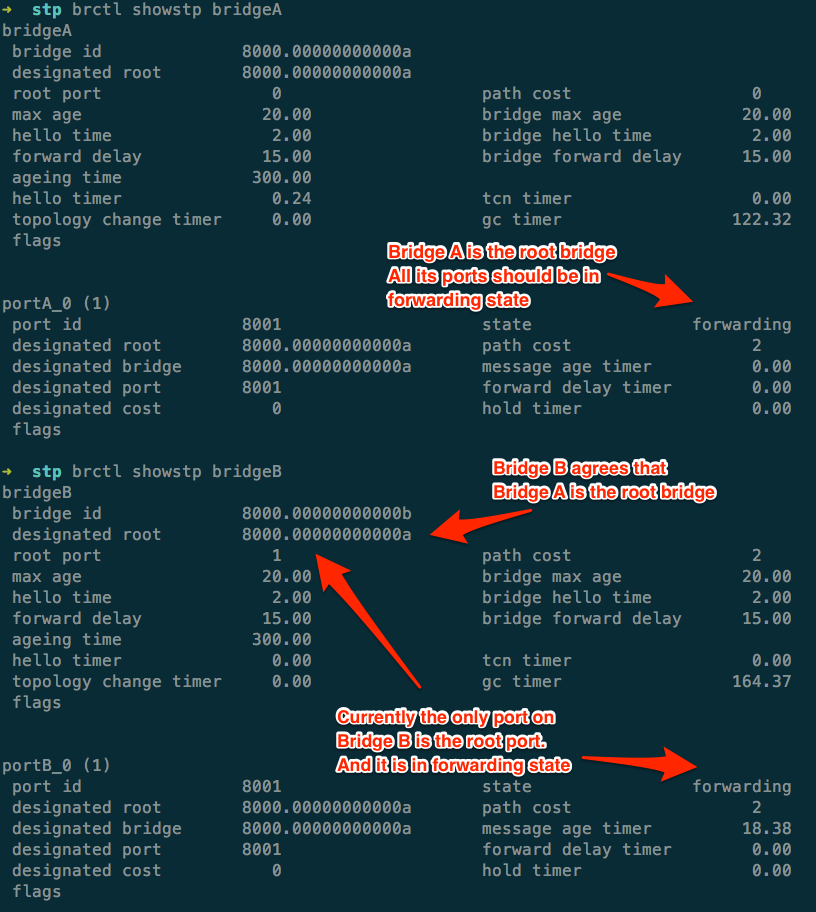 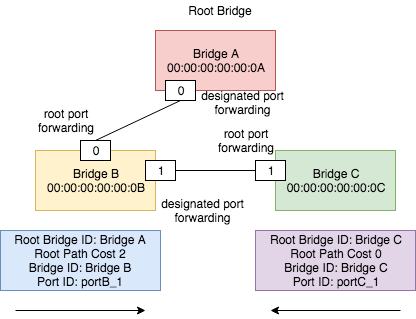 After Bridge C is connected to Bridge B through portC_1, it first thinks itself is the root bridge and sends a configuration BPDU with its own Bridge-ID as the Root Bridge ID.

Then after it receives a BPDU from Bridge B, saying that the root bridge is A, Bridge C will agree on that and stop sending BPDUs.

Now we add link portA_1 - portC_0. After that, there will be a loop in this topology. In theory, this time portC_0 should become the new root port of Bridge C because it is closer to root bridge A (cost 2) comparing to portC_1 (cost 4). 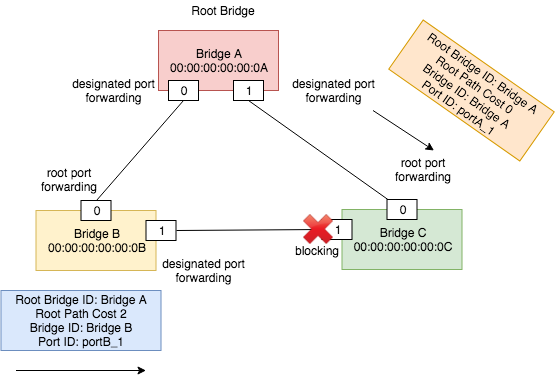 Let’s see what happens after adding this link.

Topology Change Notification (TCN) BPDUs will be sent first. But I will skip this part and only focus on how it reaches a loop-free topology.

Bridge C portC_0 should receive BPDUs with Root Path Cost 0 sent by Bridge A portA_1 and calculate the cost of portC_0 to root bridge A, which is 0 (Root Path Cost in BPDU) + 2 (port cost) = 2. Since its cost to root bridge is less than portC_1, portC_0 now becomes the root port. This can be verified looking into the bridge info:

The root port of Bridge B stays unchanged and it is still portB_0. 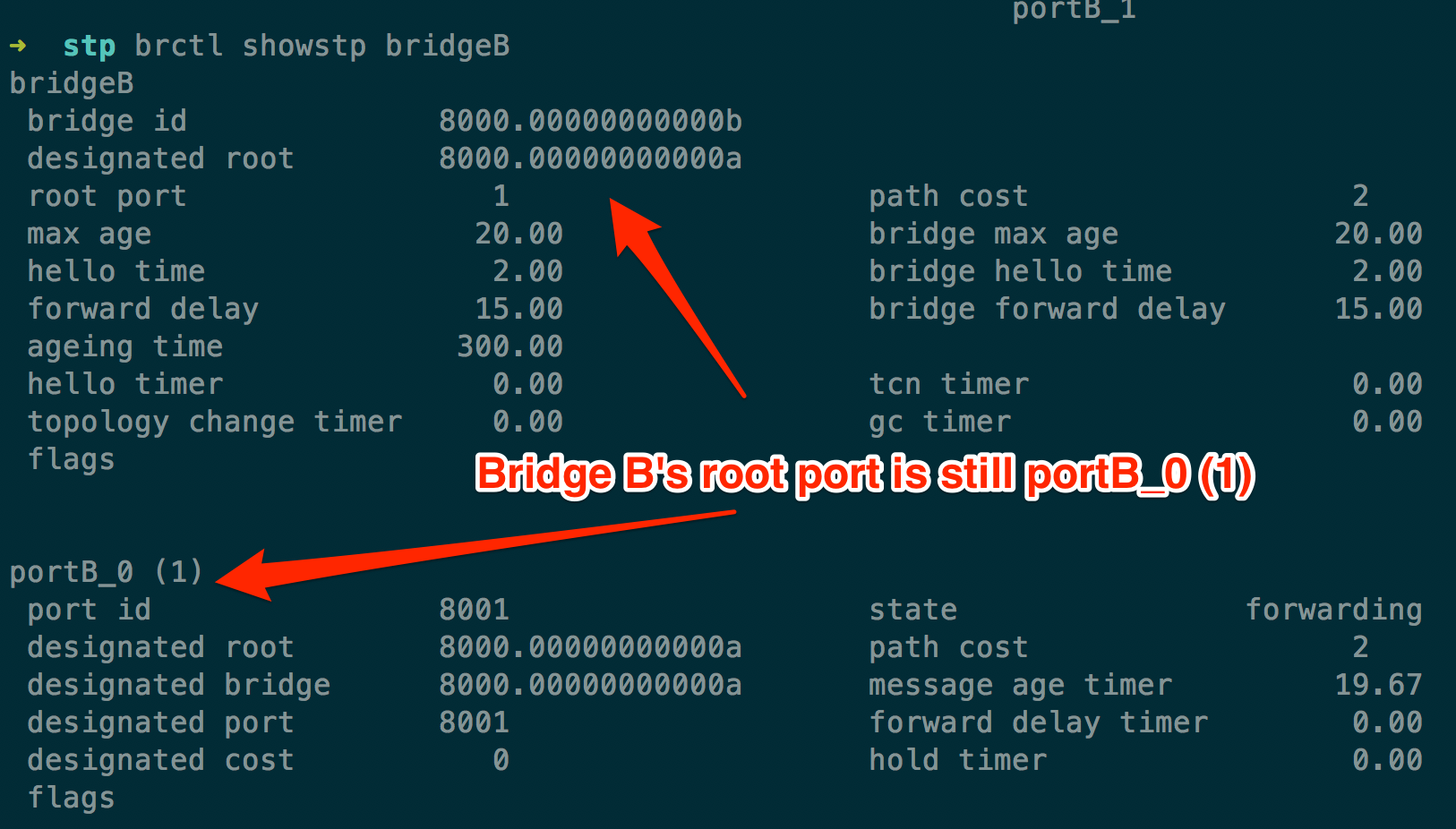 Block All Other Ports

portC_1 is not selected as the designated port in LAN portB_1 - portC_1, nor is it the root port of Bridge C. Thus, it is put into blocking state.

Now the topology is loop-free. Logically, it looks like: 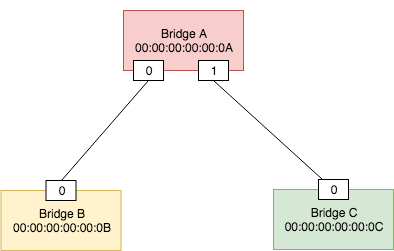 If we shut down portB_0, then STP will detect the topology change and re-enable portC_1. I will leave this experiment to the reader.